by Ag | At The Hearth, Recipes

When I was growing up, Panettone used to be given to us as a family gift and we used to get so many of them. My parents would also give them as gifts. They were treated as bread – no throwing it out.  We used to eat it fresh, toasted, buttered and if there were still left overs, made trifle and puddings with them.

Lightly butter each slice of panettone, lay slices, slightly overlapping, to fill the dish.
Combine the rum and Marsala and pour over the panettone.
Place the milk, cream, cinnamon and zest in a large saucepan over medium heat.

When it just starts simmering, remove from heat, remove and discard the cinnamon stick.
Whisk eggs and sugar until pale. 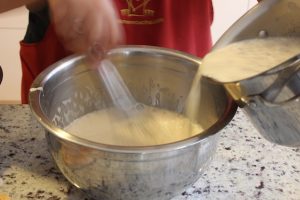 Pour the hot milk over the egg mixture and whisk to combine.
Strain over the panettone, pushing the slices down until covered by custard. 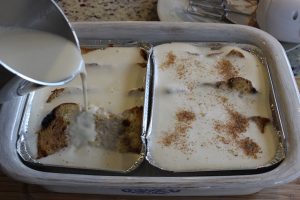 Sprinkle nutmeg and demerara sugar on the top.
Place the dish in a large baking tray, pour boiling water into the tray to halfway up the sides.

Bake for 30-35 minutes until golden and custard is just set.

SPECIAL NOTES:
Make some little ones, with no alcohol if preferred, for special parties – don’t wait until Christmas. 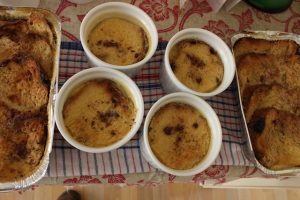