by Ag | At The Hearth

Eggplant is one of the most versatile vegetables.  I just love it!

Did you know that in Turkey, it was necessary for a bride to know how to cook eggplant at least 27 ways in order for her to be worthwhile to the husband-to-be.
And in England the eggplant used to be called a ‘Mad Apple’.  When it reached France in the 17th Century they called it  ‘Aubergine’ as it is also known now in the UK.

While eggplant doesn’t have much vitamin content, it does have some nutritional merits.
It is low in calories and sodium and has lots of minerals and antioxidants.
Eggplant also contains the phytochemical monoterpene – could be helpful in preventing the growth of cancer cells.

It is used across the world in so many different ways.
In Italy each region has a popular recipe from hollowed out and stuffed to pickled and preserved in extra virgin olive oil to have on an antipasto platter with cheese and cured meats.
The Sicilians have about a hundred different ways to cook with it and the Calabrese love it in a Caponata.
It’s the vegetable used in a rich red sauce to have with pasta since Norma sang in Bellini’s opera of the early 19th Century!
It goes well with lamb and it’s so delicious wrapped around chicken.
Simply sliced, fried and topped with freshly grated Parmesan, torn basil leaves or oregano and salt & pepper.

Eggplant makes a creamy dip, just roasted with bits of garlic and a sprinkle of oregano and olive oil.  Blend it with grana padano Parmesan cheese and black pepper. Optional to throw in a few walnuts too! 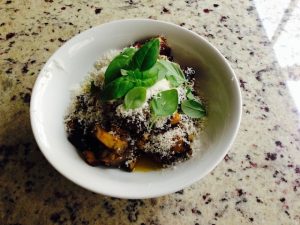 I love eggplant cooked any way what so ever – roasted, grilled or fried and as a spiced jam it goes well with steak or fish.